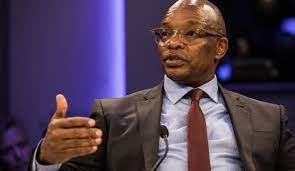 Honourable Enoch Godongwana congratulations on your appointment as the Minister of Finance and thank you for agreeing to be our guest speaker today. I also welcome the Treasury DG Dondo Mogajane. BUSA Vice President Martin Kingston and Board Members, CEO Cas Coovadia, member organisations, distinguished guests, ladies, and gentlemen.

Three years ago, you entrusted me with the stewardship of leading the business community, electing me BUSA President at a very critical time in a free SA. I succeeded the larger-than-life Jabu Mabuza who recommended me to the role. It fills me with deep pain and remorse that he is no more.

Let us observe a minute of silence in his memory and that of other colleagues who in the last 18 months passed on due to the Covid-19 pandemic.

My tenure at BUSA coincided with a time when our country was experiencing deepening economic and governance challenges. Some of the events that marked my tenure included:

These developments, colleagues, clearly demonstrate the impact that the political environment has on the economy and business. Our tenure was premised on promoting urgent structural economic reforms that would sustainably address the doggedly stubborn challenges of subdued economic growth, persistently rising unemployment, avert the sovereign rating downgrade, fix Eskom, and ensure security and reliability of energy supply, restructuring of SOEs, attract Investments and drive the agenda for the 4IR. We also emphasised the urgency for social compacts that undergird societal consensus as we make painful choices.

We also appreciated the need to consider short term mitigative measures to cushion the most vulnerable from the vagaries of the looming crises. These conditions were exacerbated by the outbreak of COVID-19. The scorecard is mixed, the economy has deteriorated highlighting the need for greater urgency and resolve: Let me therefore say this about where we find ourselves today:

I could think of no better suited leader to pass on the baton than Professor Bonang Mohale. He is the doyen of the business movement and comes with unimpeachable credentials. Similarly, Martin Kingston will be succeeded by Adrian Gore, the founder, and CEO of Discovery. We are hugely indebted to Martin, who has served two full terms in his role, during which he has given so generously of his time and commitment.

Being the only ones nominated for these roles, Bonang and Adrian stand to be elected uncontested and we would like to thank them both for agreeing to serve. We similarly thank our members for the confidence and trust they’ve shown in them.

Although we leave them with several ongoing challenges and critical issues to address, as already alluded to above, we also believe that we entrust them with an organisation better positioned to continue to play an even more meaningful part at this juncture in our country where business must step up to the plate even more so than at any time hitherto.

As we do so, I am happy to assure you that with the appointment of Cas Coovadia as the CEO, we have been able to enhance BUSA’s capacity to sustainably advance its agenda. BUSA is in the best financial position it has been since inception, but this must be sustained. BUSA needs to be better capacitated from a human resource point of view and the new leadership, along with the CEO, should address this with urgency.

In conclusion, let me reiterate that BUSA is, and will for the foreseeable future, continue to work in a complex and difficult socioeconomic and political environment. It is such an environment that makes us even more relevant and critical. It is thus incumbent upon the incoming President and Vice President to support the CEO in taking the organisation to new heights.

Let me end by expressing my gratitude to the members of BUSA, who honoured me with the privilege of leading this critical organisation. I thank the current board of directors, as well as previous directors for their unstinting support. Thanks once again to Martin Kingston who, as the Vice President, supported me beyond the call of his position.

Finally, I thank Cas Coovadia for his role in positioning BUSA since he took over as CEO in April 2020. I must also thank every one of the BUSA staff for the sterling work they have been doing with extremely limited resources. You are STARS!